Lawrence Makoare became known globally for his portrayal of several orcs in The Lord of the Rings trilogy, playing three different characters without his face being seen. Followed by his continuing role of Bolg in The Hobbit trilogy. International audiences also came to know him for his roles as Maecenus and the Barbarian Leader in Xena: Warrior Princess.

Lawrence has played a variety of villains and fearsome creatures, but The Warrior in The Dead Lands was perhaps his most complex role so far. It’s a physically demanding and emotionally resonant lead role with the added dimension of being played entirely in Te Reo Maori.

Immediately after The Dead Lands, Makoare starred as series regular ZaBing in the first season of Marco Polo, the drama series produced by The Weinstein Company for Netflix.

This was followed by the role of Ihaka in the UK mini-series Tatau, set in the Cook Islands; and an appearance in the TV movie Akamu.

Most recently Lawrence has featured in The Untold Tales of Tuteremoana, a dramatic anthology series for Maori Television.

Makoare was discovered by the late Don Selwyn, who ran drama classes for young Maori in the early1990s. He says he was a road maintenance worker who stumbled into acting by mistake. He went to a class to support his then wife, but Selwyn encouraged him to join in and very quickly arranged his first audition.

His first role was in the Hollywood feature film Rapa Nui, and his other features include The Price of Milk, What Becomes of the Broken Hearted? Feathers of Peace. He starred with Temuera Morrison in Crooked Earth, played the Prince of Morocco in Selwyn’s The Maori Merchant of Venice and played Snake in The Ferryman, produced by The Dead Lands’ Matthew Metcalfe. 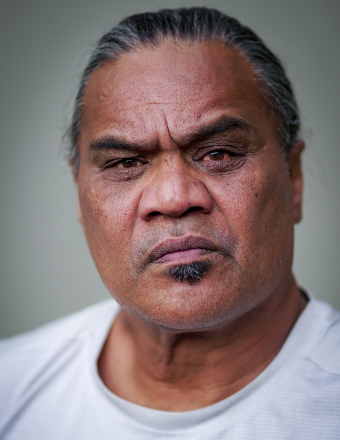 The Untold Tales of Tuteremoana (Telemovie)

Front of the Box Productions

The Hobbit: The Desolation of Smaug

Ape On A Whale

The Lord of The Rings: The Return of the King

The Maori Merchant of Venice

The Lord of The Rings: The Fellowship of the Ring

The Price of Milk

What Becomes of the Broken Hearted